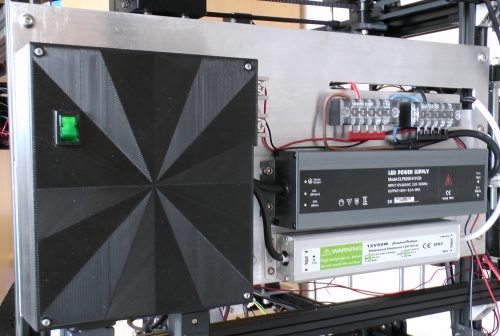 If you have read my recent post about upgrading my extruder carriage, you will know that I intend to upgrade my printer to Duet Generation 3 electronics. There are three reasons for this.

Firstly, it will enable me to use 13 stepper drivers which I will need in order to use both the load balancing gantry and also 6 extruders. These two requirements go hand in hand. That is to say, the new aluminium extruder gantry with 6 extruders plus two Duet 3 expansion boards, is a bit heavier than the old plastic gantry with 5 extruders and no expansion boards. So my already high moving mass has increased somewhat. Without the load balancing/force cancelling gantry, the printer does tend to rock about because most of that moving mass is over a metre above the floor. Although that rocking motion has no adverse effect on print quality it can be alarming to watch, especially when I’m printing at high speeds/accelerations. Currently I use either the 5 colour hot end or the load balancing gantry but I don’t have enough stepper drivers available to use both together.

The second reason for upgrading, is to be able to reduce the number of conductors that have to go through the huge cable chain that connects to the extruder gantry and carries all the wires for those extruders plus all the hot end wires on the gantry below.

Lastly, I have some plans for future upgrades which will require more input and output connectors than the current Duet/Duex5 combination provides.

The plan is that my printer will be on the Duet (https://www.duet3d.com/ ) stand at the TCT show in September, with generation 3 electronics. The fact that the printer will be on show for all the world to see, is part of the reason for some of the other upgrades that I have made, (and a few more that I have planned).

To get my printer out of my study where it resides, means that I have to split it into two sections, because otherwise it won’t pass through the doorway. The upper third simply lifts off and is held in place by 4 bolts. So mechanically, splitting the printer is easy to do. However, there are a large number of cables running between the two parts. The last time I took my printer to the TCT show, having to disconnect and reconnect all those cables was a bit of a pain and I wanted to simply that process by reducing the number of wires that have to be disconnected.

As things were, the mains inlet, PSU and SSR for the bed were all at the bottom of the printer.

The PSU is almost open frame so I made that plastic cover to prevent small screws being dropped and causing something to short circuit inside the PSU.

Here it all is with the covers off and as you can see, it isn’t very tidy.

The aluminium plate is actually two pieces 4″ (100mm) deep because I didn’t have any 8″ (200 mm) aluminium. As an aside, for some reason imperial size aluminium is cheaper than metric sizes from the supplier I use here in the UK. So I chose 4″ x 1/8″ instead of 100mm x 3mm. Hardly any difference in size but a significant difference in price. It’s drilled and tapped to take the various components, so I don’t need nuts as well as bolts. I milled a slot for the 24V power leads to pass though (there is a 4020 extrusion behind the top edge). The square cut-out at the end of the slot is to allow things like RJ45 connectors to pass through, should that be necessary.

The main PSU is actually a 24V, 8.3 amp LED supply. I’m a bit dubious about it but the specification looked good and it wasn’t cheap. I chose it because it is fan less and was a nice size and shape to fit in the space available. If it subsequently proves to be problematic, then I’ll simply fit my old PSU but I’ll have to find somewhere else to mount the smaller 12 LED supply which is just for lights. I used to use a 24v to 12v converter for the lights but I plan to fit a few more high power “COB” lights which might mean the total current draw is too high for the single 24v supply. Hence the reason to separate the lights from the rest of the printer.

Here is what is under the cover.

The incoming mains enters via a chassis mount IEC plug at the bottom left, then goes through a double pole switch with a Neon indicator to the front of the machine. There it passes through an emergency stop button and a second neon indicator is fitted so that I have a visual indication on the front that power is on. The supply returns and is connected to those “buzz bar” type shielded connector blocks to which the PSU’s connect.

The heated bed is fed from switched mains neutral and earth but the live comes via the switches then from the SSR at top right. Those wires connect to a chassis mount IEC socket and the heater bed connects to that. So this is what I’ll have to unplug when I take the machine apart.

Here is the front panel with the emergency stop button and Neon indicator. The 3 smaller switches are just for LED lights which are fed from the smaller independent 12 V PSU.

Here is how the 240v heated bed cable connects.

It plugs in to the box above then runs through the cable chain. I used flexible silicone cable for that. The bed heater itself only has live and neutral so the earth is bolted to the aluminium build plate.

I’ve connected the top aluminium mounting plate to mains earth but still want to do some more earth bonding to the frame itself.

As I’ve always intended to upgrade to Duet 3, I haven’t bothered tidying up the wiring for things like the load balancing gantry which was added. The motor mount upgrades has meant that I now have no need for the motor cooling fans and thermistors so those wires are redundant. The net result of all that, is this rats nest that I need to sort out when I get the Duet 3 hardware.